Anaheim, Calif. – On July 17, 1955, Walt Disney opened a groundbreaking new concept in entertainment called Disneyland, with the goal of being a place where adults and children, families and friends of all ages could have fun together. Today, Walt’s dream has evolved into a national treasure.

Located in Anaheim, California, approximately 25 miles south of Los Angeles, the Disneyland Resort provides guests from around the world with thrills, fun and unique Disney magic. The Resort features two theme parks, the original Disneyland and Disney California Adventure Park, along with one of the top-rated family resort destinations in the country, Disney’s Grand Californian Hotel & Spa, as cited in “Travel & Leisure Family.” The Disneyland Resort is, according to many travel surveys, the number-one family resort destination in the western United States.

Renowned as “The Happiest Place on Earth,” Disneyland is Walt Disney’s original theme park and the centerpiece of the Disneyland Resort. Covering 85-acres, it has grown over the past six decades to include eight themed “lands” including Main Street, U.S.A., Adventureland, Frontierland, New Orleans Square, Critter Country, Fantasyland, Mickey’s Toontown and Tomorrowland. 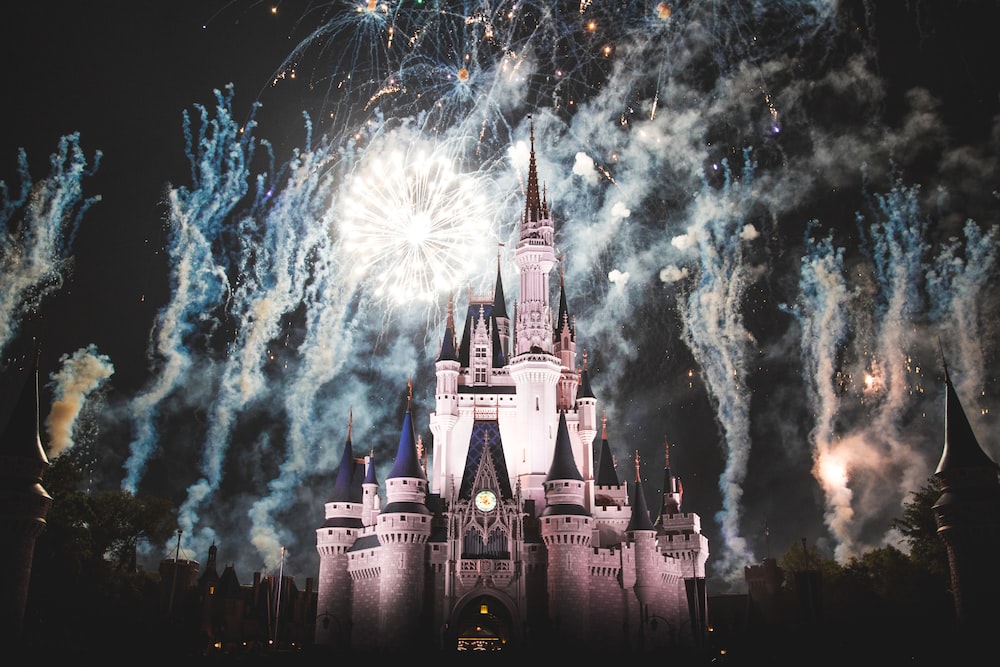 Featuring more than 60 adventures and attractions, Disneyland boasts some of the most quintessential Disney theme park experiences in the world including classics such as Pirates of the Caribbean, Haunted Mansion, Jungle Cruise, Walt Disney’s Enchanted Tiki Room, “it’s a small world,” Matterhorn Bobsleds and Indiana Jones Adventure.

With unforgettable seasonal events featuring popular shows and attractions such as Haunted Mansion Holiday, Space Mountain Ghost Galaxy, “it’s a small world” Holiday, snowfall on Main Street, U.S.A and “A Christmas Fantasy” Parade, Disneyland is an ever-evolving experience. As Walt Disney desired, Disneyland is in constant state of “becoming” with new adventures and attractions always on the drawing board.

In  2006, Pirates of the Caribbean, the classic Disneyland attraction brought to the big screen in Pirates of the Caribbean: The Curse of the Black Pearl, added new characters (such as Captain Jack Sparrow and Barbossa) from the blockbuster entertainment franchise. In June 2007, Finding Nemo Submarine Voyage surfaced in Tomorrowland. The underwater adventure features the eight submarines of the fondly remembered “Submarine Voyage” attraction and is inspired by the Disney presentation of the Pixar Animation Studios film, “Finding Nemo.”  In 2011, guests began exploring new adventures – six new destinations in more than 50 different 3D combinations – at Star Tours – The Adventures Continue. Construction of a new Star Wars-themed land began in 2016.

In 2013, Disney Princesses began interacting with park guests in the new Fantasy Faire, a royal setting near the iconic Sleeping Beauty Castle. Guests may also see Mickey Mouse and other Disney characters in a dazzling adventure filled with music, fun and special effects at the stage show “Mickey and the Magical Map,” presented daily on the Fantasyland Theatre stage.

With the completion of a five-year expansion project, continuing the growth of Disneyland Resort as a multi-day, world-class vacation destination, Disney Imagineers have brought more of Walt Disney into the 60 acres of Disney California Adventure. The park celebrates the hope and optimism of California that attracted Walt to this land of opportunity in the 1920s. In 2010, the nighttime water spectacular “World of Color” debuted, with a new viewing area along Paradise Bay. In 2011, guests began taking magical journeys on The Little Mermaid ~ Ariel’s Undersea Adventure, In 2012, Buena Vista Street, inspired by the Los Angeles of the 1920s and ‘30s, began welcoming guests entering Disney California Adventure with the Red Car Trolley and an array of restaurants and shops. 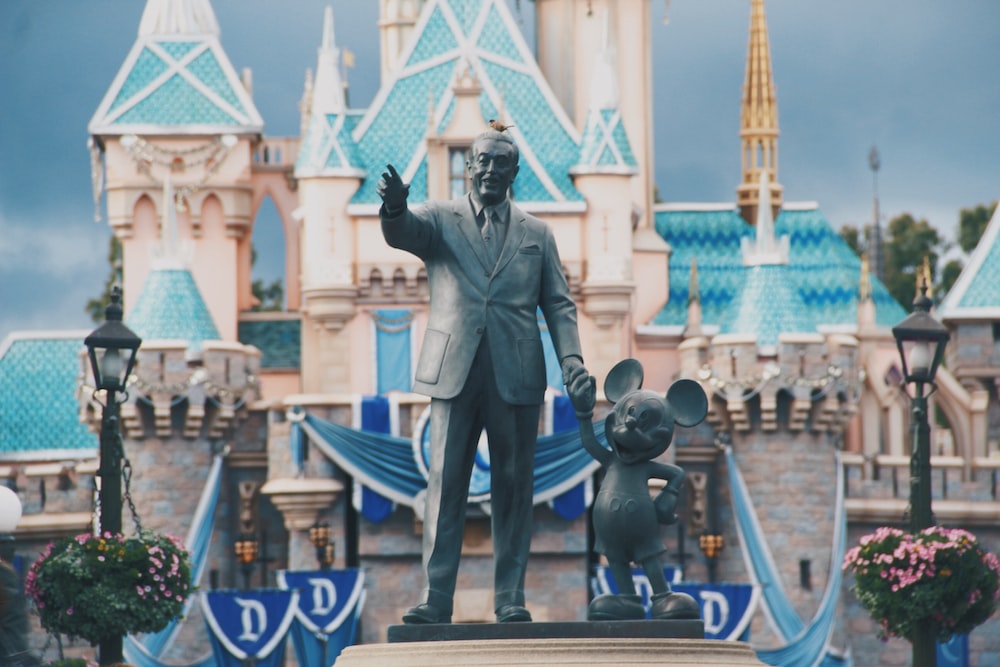 One of the signature attractions at Disney California Adventure is recently reimagined Soarin’ Around the World, a breathtaking virtual hang gliding tour over some of the world’s most amazing landmarks and scenic wonders. Another guest favorite is Toy Story Mania!, an attraction that invites guests to enjoy a high-scoring, immersive adventure, entering a wild 4D world of game play.

Guests at Disney California Adventure experience California-style fun on such attractions as the thrilling twists and turns of California Screamin’ roller coaster, and the icy-cold, white-knuckle rafting of the Grizzly River Run. Fun is even found in the smallest of places such as a bug’s land, inspired by the Disney●Pixar film “A Bug’s Life” and featuring the 3D antics of It’s Tough to be a Bug!

The 2000-seat Hyperion Theater presents the spectacular stage production “Frozen – Live at the Hyperion” immersing guests in the world of Arendelle with elaborate costumes and sets, special effects and scenic transformations. In the nearby Disney Animation attraction, Turtle Talk with Crush provides fun for the whole family with some interactive magic.

In 2017, even more fun will await guests in Hollywood Land, including an increased Super Hero presence on the backlot and the thrilling new attraction Guardians of the Galaxy – Mission: BREAKOUT! This epic new adventure will combine a breathtaking free-fall sensation with all-new visual and audio effects, including music inspired by the popular “Guardians of the Galaxy” film soundtrack.

Bridging the two theme parks and three hotels is Downtown Disney, an admission-free entertainment, dining and retail district. The 300,000-plus square-foot Downtown Disney District includes two Starbucks locations, ESPN Zone, Sprinkles, Rainforest Café, Ralph Brennan’s Jazz Kitchen, Earl of Sandwich, AMC 12 and more than 20 retail shops including Sephora and LEGO Imagination Center. Guests can also board a Disneyland Monorail for a trip from the high-energy of Downtown Disney to the futuristic landscape of Tomorrowland in Disneyland.

Designed in California’s renowned Arts and Crafts style of the late 19th and early 20th centuries, Disney’s Grand Californian Hotel & Spa is a true testament to Disney’s hospitality and creativity. With the 2009 expansion, the Grand Californian hotel has 948 guest rooms, including 44 guest suites, and 50 two-bedroom equivalent vacation villas. Those vacation villas, which include kitchens, living and dining areas and other home-like amenities, make up the first West
Coast appearance of Disney Vacation Club, Disney’s innovative vacation-ownership program.

The hotel also has an array of fine dining including the nationally renowned and award-winning Napa Rose restaurant that provides specialty dining dishes, spectacular views of Disney California Adventure and expert sommeliers to assist in making the perfect selection from one of the finest collections of California wines anywhere in the world.

Storyteller’s Cafe is another dining experience within the hotel where kids and adults alike can enjoy a distinct meal with some of Disney’s favorite characters, including Chip & Dale. The Grand Californian also has three pools and the luxurious Mandara Spa.

For more than 50 years, the iconic Disneyland Hotel has provided its guests with a rich tradition of fun and warm hospitality.  The award-winning hotel has 973 guest rooms and 60 suites along with an array of fine dining including the award-winning Steakhouse 55and Goofy’s Kitchen. A major renovation of Disneyland Hotel was completed in 2012, including updated rooms with new décor and surprises, a cleverly themed new water play area, two swimming pools, the Tangaroa Terrace casual-dining restaurant, Trader Sam’s Enchanted Tiki Bar and re-theming of the hotel’s three guest room towers.

California’s breezy laidback beach lifestyle is in full effect at Disney’s Paradise Pier Hotel. Inspired by a beach boardwalk hotel and boasting spectacular views of Disney California Adventure, the hotel has 481 rooms, including 25 suites.  For children, the dining highlight at PCH Grill features “Surf’s Up! Breakfast with Mickey & Friends,” a character experience. Guests may relax at the scenic outdoor terrace with its sparkling pool and bubbling spa.