Following two successful winter seasons from the North East Coast  to Martinique, Norwegian announced on May 31, 2017 the launching of two new routes to the island from Providence’s T.F. Green Airport and Fort Lauderdale-Hollywood International Airport, starting October 30.  The World’s Best Low-Cost Long-Haul Airline is adding to its four weekly flights out of New York City’s John F. Kennedy International Airport, a twice weekly service from Providence and a thrice air schedule from Fort Lauderdale, for the 2017/2018 winter season!

The schedule from PVD to FDF will operate as follow on Mondays & Fridays:

The schedule from FDF to PVD will operate as follow on Thursdays & Sundays:

The schedule from FLL to FDF will operate as follow on Mondays, Wednesdays & Sundays:

“The boost air service from the US is indeed a pledge of commitment from Norwegian Air, one of our closest industry partner and also a reflection of the growing  popularity of the island on the U.S market,” said Muriel Wiltord, director, Americas of the Martinique Promotion Bureau.

“Martinique Magnifique is definitely more affordable and accessible than ever.”

“Norwegian is excited to once again return to the magnificent island of Martinique for the 2017/18 winter season.  Due to demand, we are increasing flights from New York JFK, and we are adding connections with new nonstop routes from both Fort Lauderdale and Providence.  This allows more and more American travelers to discover such a hidden gem in the Caribbean.  It’s now easier and more affordable than ever to fly to the French Caribbean, and we’ve seen a significant increase in visitors to Martinique as a result of our flights and cooperation with the tourist board,” said Thomas Ramdahl, chief commercial officer.

With these new routes along with increased service out of JFK, the Island of Flowers is thrilled to welcome even more US visitors.  The new route operating out of Providence will serve not only Rhode Island but also other states such as Massachusetts, Connecticut etc., covering a large part of New England.  In addition, Martinique increases significantly its air service from Florida with this new route out Fort Lauderdale. 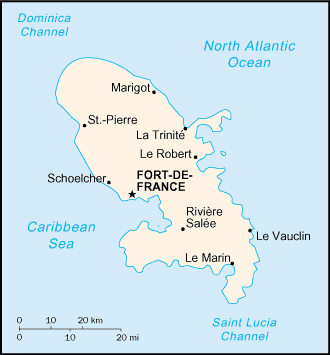 The Caribbean Island with French Flair, The Isle of Flowers, The Rum Capital of the World, The Isle of the Famed Poet (Aimé Césaire) – Martinique ranks among the most alluring and enchanting destinations in the world. As an overseas region of France, Martinique boasts modern and reliable infrastructure – roads, water and power utilities, hospitals, and telecommunications services all on par with any other part of the European Union. At the same time, Martinique’s beautifully unspoiled beaches, volcanic peaks, rainforests, 80+ miles of hiking trails, waterfalls, streams, and other natural wonders are the equal of neighboring Dominica to the north and St. Lucia to the south, so visitors here truly get the best of both worlds. The currency is the Euro, the flag is “Le Tricolor,” and the official language is French, but Martinique’s character, cuisine, musical heritage, art, culture, common language, and identity are of a distinctly Afro-Caribbean inclination known as Creole.

It is this special combination of modern world conveniences, pristine nature, and rich heritage that has earned for Martinique several notable distinctions in recent years, including being ranked in the Top 16 Places to go in 2016 by Condé Nast Traveler, named as a “Must-Visit” destination by Caribbean Journal, “Best Caribbean Destination” by About.com, and “Top Caribbean Island for Delectable Dining” by Caribbean Travel + Life. The Bay of Fort-de-France, which fronts Martinique’s charming capital city, was also inducted into The Club of The Most Beautiful Bays in the World. Martinique’s storied history further stirs travel passions. Napoleon’s bride, Empress Josephine, was born and raised in Martinique, while the majestic Mt. Pelée volcano and St. Pierre, The Pompeii of the Caribbean, are found here.