BELLEVUE, Wash., June 29, 2017/ — Today, Expedia.com® released the results of the 2017 Expedia® Flip Flop Report1, a global study that explores cultural differences in beach attitudes and behaviors across 17 countries from around the globe. The results are an enlightening and entertaining look at what goes into a beach vacation, including the most popular destinations, which countries’ residents don the most risqué beach attire, and what behaviors will get you banned from the sand.

Americans Go Domestic
As Americans gear up to celebrate our nation’s independence this weekend, it seems fitting that most Americans look no further than home soil when planning a beach vacation. Amongst the biggest factors are the clean, safe beaches, great weather and minimal travel time compared to international destinations, with Florida, California and Hawaiiboasting the most popular beaches in the country. However, younger Americans were twice as likely as Americans 35 years and older to have traveled further abroad to find the sand and sun, naming Mexico, Brazil and Australia as prominent vacation spots. Across all ages, the top 10 beach holiday destinations for American respondents are: 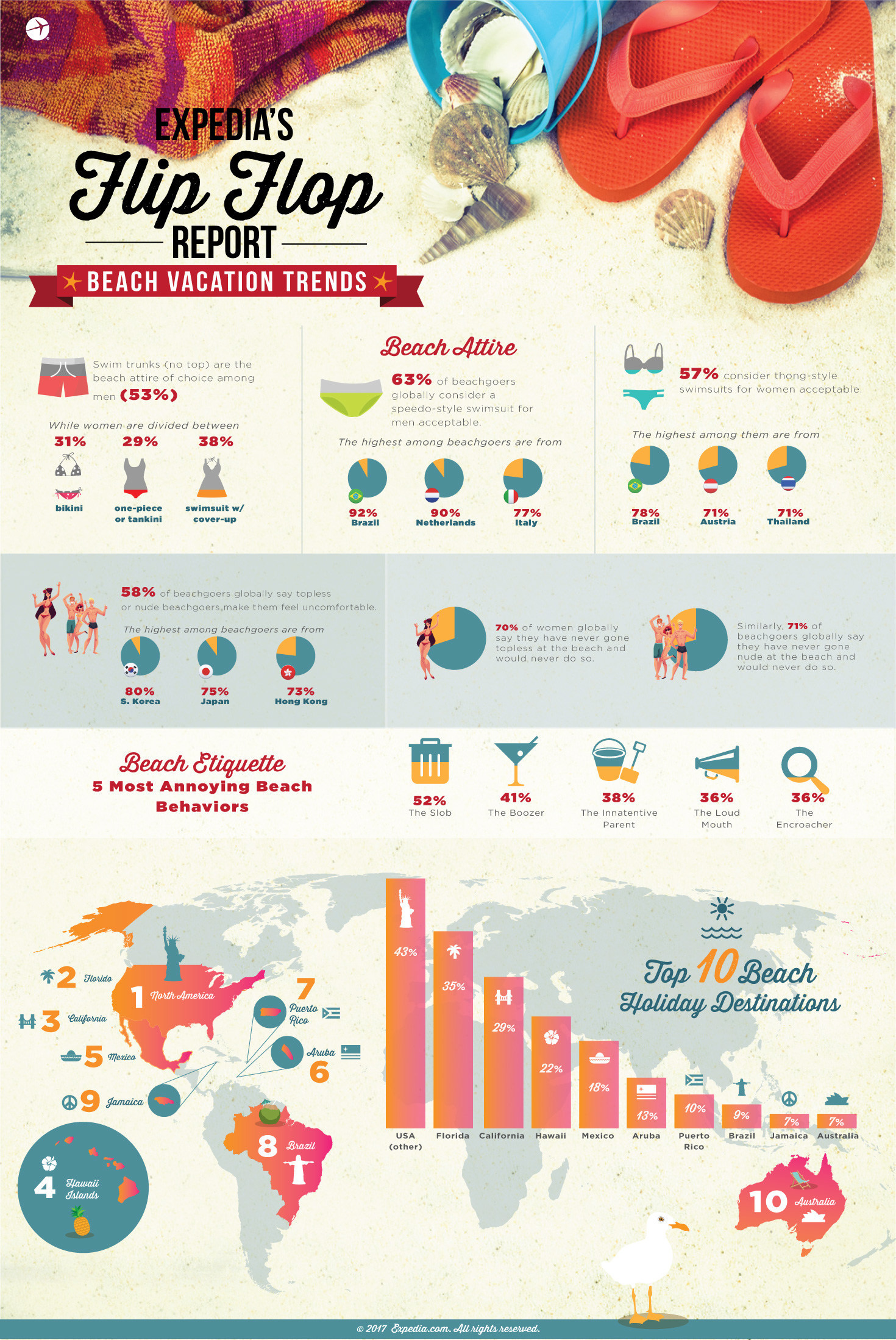 “Beach vacations have an almost universal appeal, and year after year we see people flocking to destinations like Hawaii, Mexico and the Caribbean,” said Sarah Gavin, vice president of global communications, Expedia.com. “The flight time is quick from many parts of the U.S., and when booked as a package on Expedia.com, travelers can find huge savings of up to $1,1002 – great news if you’re in need of some sand and sun before summer ends.”

Americans Spend the Most Time and Money Getting Beach Ready
This year’s report looked at how travelers prepare for upcoming beach holidays – from dieting and wellness to getting pampered at the salon. Globally, beachgoers begin their readiness routines an average of 40 days in advance of a trip, and more than a quarter (29 percent) of Americans spend more time packing than on vacation.

The biggest budget busters are Americans, who spend around 15 percent more than the global average on things like shopping and salon visits in preparation for their beach holidays, and 53 percent more on the actual vacation, with the most money spent on accommodations.

The Slob Continues Reign as Public Beach Enemy Number One
For two years running, the best way to anger your fellow beach-goers is to leave a trail of garbage in your wake, growing in unpopularity by 17 percent this year. The Sand-flinger also saw a boost in 2017, moving up four slots to overtake The Loud Mouth for a position in the top three. According to this year’s report, the most annoying beach behaviors for Americans are:

Beach Fear Factors
More than 80 percent of Americans surveyed have been on a beach vacation and nearly all of them reported they enjoyed it, but there are still some scenarios that worry even the most avid beachgoer. Globally, theft was the most-dreaded occurrence, with 70 percent of worldwide respondents listing fear of having something stolen as a major concern. And while globally, more than half of the respondents were nervous about shark attacks (60 percent) and murky water (63 percent), for Americans specifically, the quality of the hotel (61 percent) and the high price of food and drink (60 percent) were the top two worries.

Nude Sunbathing Still Unlikely to Catch on in the U.S.
Like last year, nearly 70 percent of Americans reported they were “somewhat or very uncomfortable” with nudity at the beach, ranking thong-style swimwear for men (61 percent) and mankinis (58 percent) close behind in terms of disapproval ratings. Compared to the global average (29 percent), respondents from Spain (53 percent) and Germany (47 percent) are the most liberal on going bare. Meanwhile, the global attitude about speedos for men is becoming increasingly tolerant, deemed acceptable by more than 70 percent of respondents, an eight percent increase over last year.

For more information and revelations from the 2017 Flip Flop Report, visit the Expedia Viewfinder blog.

1Survey Methodology
This study was conducted on behalf of Expedia by Lonergan Research, a boutique research and consultancy firm. This survey was conducted online in May 2017 across North America, Europe, South America and Asia Pacific. The study was conducted amongst 15,363 respondents aged 18+, across 17 countries (USA, Canada, Mexico, Brazil, UK, France, Germany, Italy, Spain, Netherlands, Belgium, Australia, New Zealand, Japan, South Korea, India and Thailand). This project was conducted among members of a permission-based panel. Sampling quotas were used and after interviewing, data was weighted to the latest population estimates to ensure the sample was representative of each country’s population in terms of age and gender.

Expedia, Expedia.com, Expedia+, Find Yours, Vacation Deprivation and the Airplane logo are either trademarks or registered trademarks of Expedia, Inc. in the U.S. and/or other countries. Other product and company names mentioned herein may be the property of their respective owners © 2017 Expedia, Inc. All rights reserved. CST # 2029030-50.