LOS ANGELES, Dec. 15, 2017 / — Viking® (www.vikingcruises.com) today celebrated the kickoff of its inaugural World Cruise on its fourth and newest ocean ship, Viking Sun®, welcoming guests in Miami for the sold out 141-day itinerary. Viking Sun will spend nearly the next five months on the World Cruise, which spans five continents, 35 countries and 64 ports. During this journey from Miami to London, guests will first explore Cuba and the Caribbean, before sailing the Panama Canal to call on Los Angeles, the home of Viking’s U.S. headquarters and first West Coast port of call. Viking Sun will then sail to the South Pacific, Australia and Asia, where the ship will be christened in Shanghai on March 8, 2018. From there, Viking Sun will continue on with ports of call in Asia and then Europe, before finishing the World Cruise in London on May 5.

“Our World Cruises are the most extensive and culturally immersive journeys available in the industry. For two decades, we have continued to expand our destination-focused itineraries to new regions of the world, so as our fleet grows it is a natural progression for us to offer grand voyages of this scope for our guests,” said Torstein Hagen, Chairman of Viking. “Our guests are experienced travelers who want to explore the world in comfort; our offerings allow them to be immersed be in the cultures of the world when they are onshore and when they are onboard our award-winning fleet of sister ships.” 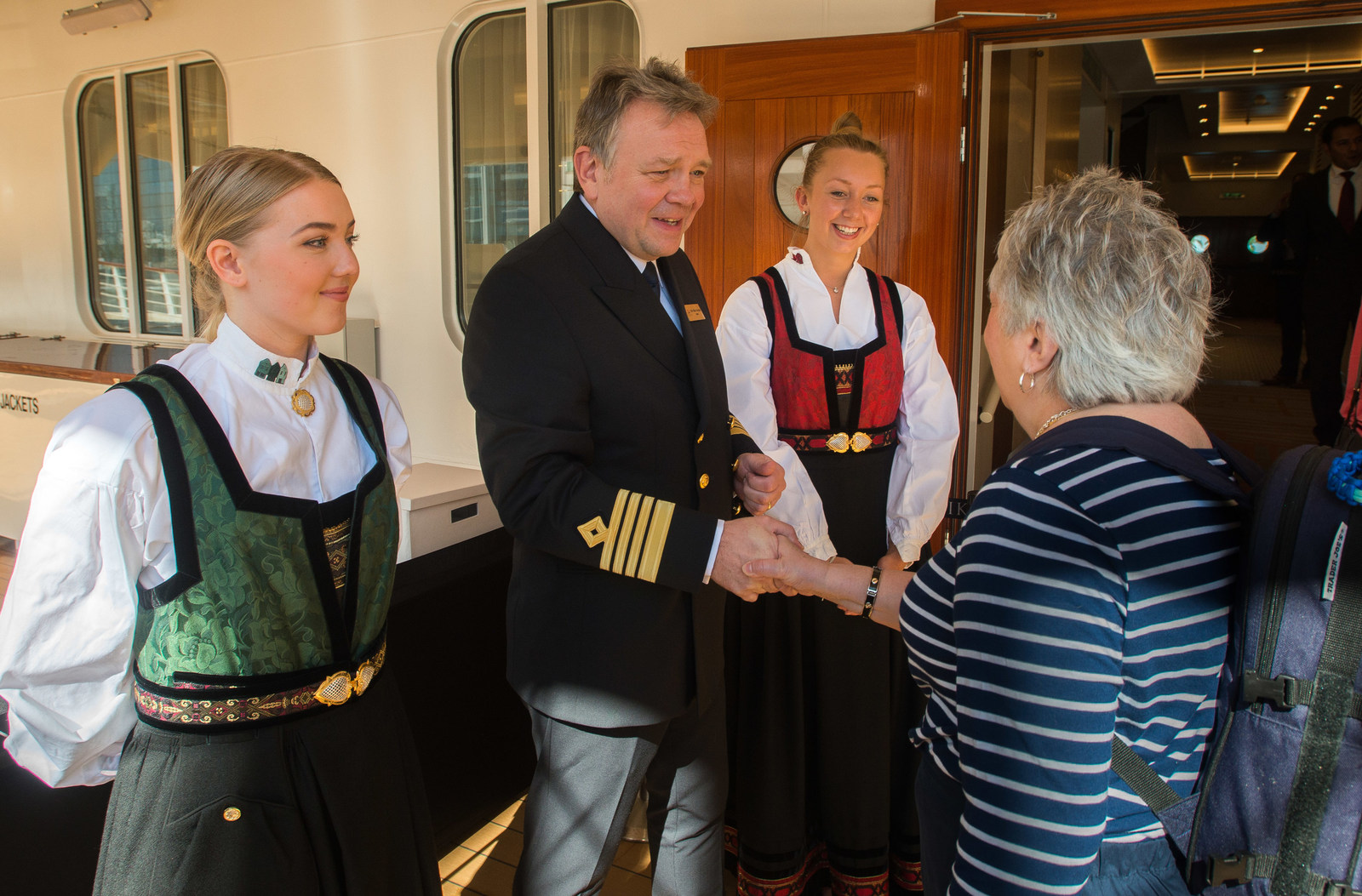 Viking Sun Captain Atle Knutsen and staff welcome World Cruise guests onboard in Miami on December 15. Viking Sun will set sail today on Viking’s first World Cruise, from Miami to London. The sold out 141-day itinerary will span five continents, 35 countries and 64 ports. It will first Cuba and the Caribbean, before sailing the Panama Canal to its first West Coast port of call in Los Angeles, home of Viking’s U.S Head Quarters.

In addition to guests, also sailing on the World Cruise will be six casks of Viking’s own “Linje” Aquavit. In keeping with a Norwegian tradition that dates back hundreds of years, the Scandinavian spirit will mature in oak barrels during the sailing, crossing the equator (linje) twice as part of the maturation process. According to the tradition, it is believed that the moving seas and frequent temperature changes cause more flavor to be extracted from the casks.

Viking Sun will continue to sail the globe during Viking’s 2019 World Cruise. The recently announced 128-day itinerary from Miami to London, will visit five continents and immerse guests in the rich cultures of 21 countries from South America and the South Pacific to Australia and Africa. Like on all Viking itineraries, World Cruise guests will enjoy a complimentary shore excursion in each of the 64 ports and free unlimited Wi-Fi; they will also receive Business Class airfare and all gratuities and service fees, along with an extensive list of added-value inclusions in their cruise fare.

Viking’s ocean ships have a gross tonnage of 47,800 tons, have 465 staterooms and host 930 guests. Classified by Cruise Critic® as a “small ship,” the all-veranda Viking Sun is the newest addition to Viking’s award-winning ocean fleet, which also includes Viking Star®, Viking Sea® and Viking Sky®. Viking will welcome two more sister ships in the next two years, including Viking Orion® in summer 2018; with the arrival of a sixth ship in 2019, Viking will be the largest small ship ocean cruise line. Two additional ships are also on order for delivery in 2021 and 2022.

Designed for discerning travelers with interests in science, history, culture and cuisine, Chairman Torstein Hagen often says Viking offers guests “the thinking person’s cruise” as an alternative to mainstream cruises. Ships are small to get guests closer to their destination, with more time in port and more overnights. Onboard, guests find serene Scandinavian spaces, where every room is beautiful and functional, quiet and filled with light. All-veranda ships mean that guests experience every day with a new, expansive vista. With the most al fresco dining at sea, featuring regional cuisines and always-available American classics, Viking’s guests can truly dine in their destination. A focus on cultural enrichment brings immersive experiences onshore and onboard. And only The Viking Way brings guests itineraries that feature Local Life, Working World and Privileged Access experiences.

In addition, Viking Inclusive Value provides a small ship experience at a big ship value and no nickel-and-diming – with every cruise fare including a veranda stateroom, shore excursions in each port of call, all onboard meals, and all port charges and government taxes. Guests also enjoy many complimentary amenities as part of their fare, including: beer and wine with lunch and dinner service; premium dining reservations; Wi-Fi; self-service laundry; access to the Thermal Suite in the LivNordic Spa; and 24-hour room service—an included value of more than $200 per person, per day for an average cruise.

Viking was founded in 1997 with the purchase of four ships in Russia and is now celebrating its 20th anniversary in 2017 as the leader in river and small ship ocean cruising. Designed for discerning travelers with interests in science, history, culture and cuisine, Chairman Torstein Hagen often says Viking offers guests “the thinking person’s cruise” as an alternative to mainstream cruises. In its first two years of operation, Viking has been rated the #1 ocean cruise line in Travel + Leisure’s 2016 and 2017 “World’s Best” Awards. Viking currently operates a fleet of 63 vessels, offering scenic cruising on rivers and oceans around the world. By 2022 the company will operate eight 930-guest ocean cruise ships and will be the largest small ship ocean cruise line. In addition to the Travel + Leisure honors, Viking has also been honored multiple times on Condé Nast Traveler’s “Gold List” as well as recognized by Cruise Critic as “Best Overall” Small-Mid size ship in the 2017 Cruisers’ Choice Awards, “Best River Cruise Line” and “Best River Itineraries,” with the entire Viking Longships® fleet being named “Best New River Ships” in the website’s Editors’ Picks Awards. For additional information, contact Viking at 1-855-8-VIKING (1-855-884-5464) or visit www.vikingcruises.com.

Top Five Gifts for a Friend Who is Always Cold